After a draining but a fun 5 years at the City College of New York, I finally graduated, and I needed a break. My mom asked me to travel with her to Nigeria for mission work to help build a well for the primary and secondary school students in her hometown. This idea was amazing, however, this was not the reward that I was looking for. I wanted to lay on a beach. I wanted to chill and relax. But, I guess my mom finally convinced me to go.

On the first of our eight days in Nigeria, we went to the Mobee Royal Family Original Slave Relics Museum Badagry. I saw the journey of Nigerian men, women, and children to becoming slaves. I viewed the document that King Wawu of Badagry signed to give away his people to strangers, for ammunition. I saw the chains that were used to bind the necks and feet of my people. I saw the exhausting miles that they walked away from home, towards the Atlantic Ocean with their slave masters.  I saw the well, on the way to the Atlantic Ocean, where they were forced to drink “charmed water” so they could lose their memories, which would make it impossible for them to go back home. I stood on the Atlantic Ocean, in Africa, and at that moment I imagined the moments when the slaves were handed over to their white masters. Completely clueless of what was to come, but knowing that their identity and lives would be forever changed I was upset that a ruler didn’t know the value of his people and would sell them for mere “new equipment.” 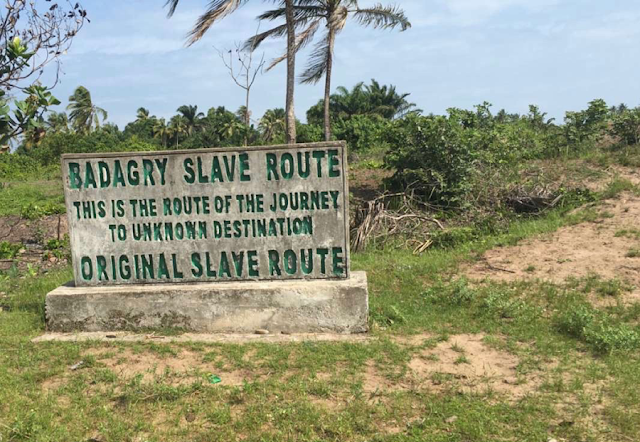 The following day, my extended family and I went to see the site where Christianity in Nigeria started. In 1842 underneath the “Asioe Tin” also called the “Agia Tree,” Reverend Thomas Freeman introduced Christianity to the neighborhood in modern day Lagos. Three years later evangelicals built a one-story house, which now stands as a symbol. This was the first western house built in Nigeria. Inside that house, Bishop Samuel Ajayi Crowther who was the first African Bishop translated the English bible into Yoruba. Not only was the first Yoruba bible created here, but also the first western chair…lol.

Fast forward to the fifth and sixth days, my mom and I went to her hometown, Eruwa, to see the progress of the water well. When we went to the school sites, the engineers were still drilling for water. It was a massive project. Two days later we learned that the engineers were unsuccessful in finding water at that site. They then started to look at other sites that were not far away from the school.

My mom decided to start this venture because she went to the same school and did not have drinking water. She wanted to give children the opportunity to have a basic necessity, instead of walking miles to find a water. I also had a chance to see the Eruwa Clinic that admits mostly pregnant farmers. They told me that they had a massive need for baby clothes, diapers, and strollers.

With all that said, I got to do a little of what I had originally wanted to do. Before my last day, I went to one of the beaches in Lagos. I got to ride on a horse! At first, I was scared, since it was my first time, but it was really fun!!

The truth is, All things work together for good because I did not really want to do this trip, but it has taught me to be grateful. I have realized that am not on this earth to only fulfill my desires but to lend a helping hand to others who desperately need it. I would not have realized this if I had not gone on this trip with my mom.