Posted on January 16, 2020June 25, 2020
–By: Asshur Cunningham
With bicycles at every turn maybe Amsterdam (DAM) should be nicknamed the city of bikes. Nonetheless, the truth is DAM is a beautiful cosmopolitan metropolis, with lots to see and even more to do.
Getting to DAM
Getting to DAM is pretty accessible and cheap, especially from European cities. I flew into DAM from London Luton Airport on EasyJet, one of Europe’s budget carriers. The hour-long flight, which was extremely delayed, brought me to Schiphol International Airport a little after 11 PM, Amsterdam time. From Schiphol, I purchased a train ticket for €4,67, which took me to Amsterdam Central. There, you have the option to take the metro, bus or tram to your final destination. Though, since I arrived late, following multiple delays, I had to take a bus from Central Station to my hostel, The Generator Hostel. A nightly stay in a four-room dorm at the time cost €40, but it could be as low as €17. The price you pay depends on when you are traveling and how soon you book.
Bike
I highly recommend that you rent a bike—well if you can ride one. Amsterdam is one of the most bike-friendly cities I have ever visited. People from all age groups were riding. My hostel offered the option to rent a bike, however, by the time I went to rent mine they were fresh out, which now that I think about it makes total sense. That being said, my advice is to rent from Black Bikes. Their rate was €9 daily. I rented my bike for 2 days at €26.
Once you have your bike you are free to go anywhere, whenever you want. And trust me, you won’t be the only one on one. The entire city rides, so while you are looking out for cars make sure you watch out for cyclists too, they do not stop for anyone.
Flower Market
While you have your bike, take a ride to the flower market. You will be sure to find lots of restaurants in the area. It is also a good place to stock up on Dutch cheese from one of the stores nearby.
Red Light District
The most popular place people visit Amsterdam for is the Red Light District. If you want to beat the crowds, go at day; and if you want to be with the crowds and feel the energy, go at night, it’s swarming with people. By the way, remember it is considered rude to take pictures of the prostitutes or to even stand in front of their window chit-chatting, they will surely shoo you away. After all, you are possibly detracting from their business. The Red Light District area has lots of restaurants and bars and is also not too far from Chinatown. So if you get hungry after your visit, there are many options around for you to grub.
Café vs Coffee Shop
Maybe one of the most interesting nuances in DAM is understanding the difference between Cafes and coffee shops. A café is where you go to grab a hot cup of coffee and socialize with friends over coffee and pastry. However, in DAM coffee shops are where you go to legally purchase pot or edibles. Shopper beware, though Amsterdam is a pretty card friendly city, at Coffee Shops, cash is king and cards are usually not accepted.
In case you were wondering, smoking is supposed to be confined to the Coffee Shops. Nevertheless, you will see people smoking wherever they want. Will there be police there to stop you? I had probably only seen them once, in Dam Square, but they are certainly not policing your every move.
Canal Cruise
The canals are everywhere, and although you may not necessarily see the need to get on a boat and do a tour, I suggest that you do. It is pretty dope to see how intricately connected the canals are. They are technically roads where you can traverse from one end of the city to the next. I took my cruise at night; and while it was beautiful, and would be something I’d consider doing with bae, *cough, cough* I think it is best in the day. Even more ironic was the company that I toured with, it was called Lovers Cruise… But do not let the name dissuade you, it is not a cruise that is specific to lovers or even couples. Though they offer dinner cruises, which would probably be more of a couple’s activity. Still, before you walk to the back of Central Station to book your canal excursion, check Airbnb to see if there are deals on boat tours, which will be on smaller, more intimate boats.

Food
Finally, like traveling anywhere, you ought to try local food. Heineken was my go-to beer, after all, it’s made in Amsterdam. Now, I am not a beer connoisseur, so it is quite difficult to say if it had a distinctly different taste than that in the U.S. What I can say is that the pancakes were quite different from what we know pancakes to be in the U.S. The Dutch pancakes usually come with different types of toppings. I had one with lamb. Honestly, it was pretty tasty. I remember seeing the Van Gilse Schenkstroop on the table, knowing that it was syrup, but I was wondering how it would taste with my meat pancake. To my surprise, the syrup and pancakes with the lamb were really good. By the way, it was not maple syrup, it was Stroop, so it tasted different from what I was used to.
Also, how can you go to Amsterdam and not try the cheese? They say the Dutch people make the best cheese. From what I tried, I loved it! It was smooth and creamy. And you dare not leave DAM without trying Stroopwafel. I had mine from the Albert Crypt market, where they were made fresh in front of me. Now let me caution you, the filling in the center is very sweet, but it’s good. It is a good idea for a souvenir, and you will be able to get plenty at the Albert Crypt Market. 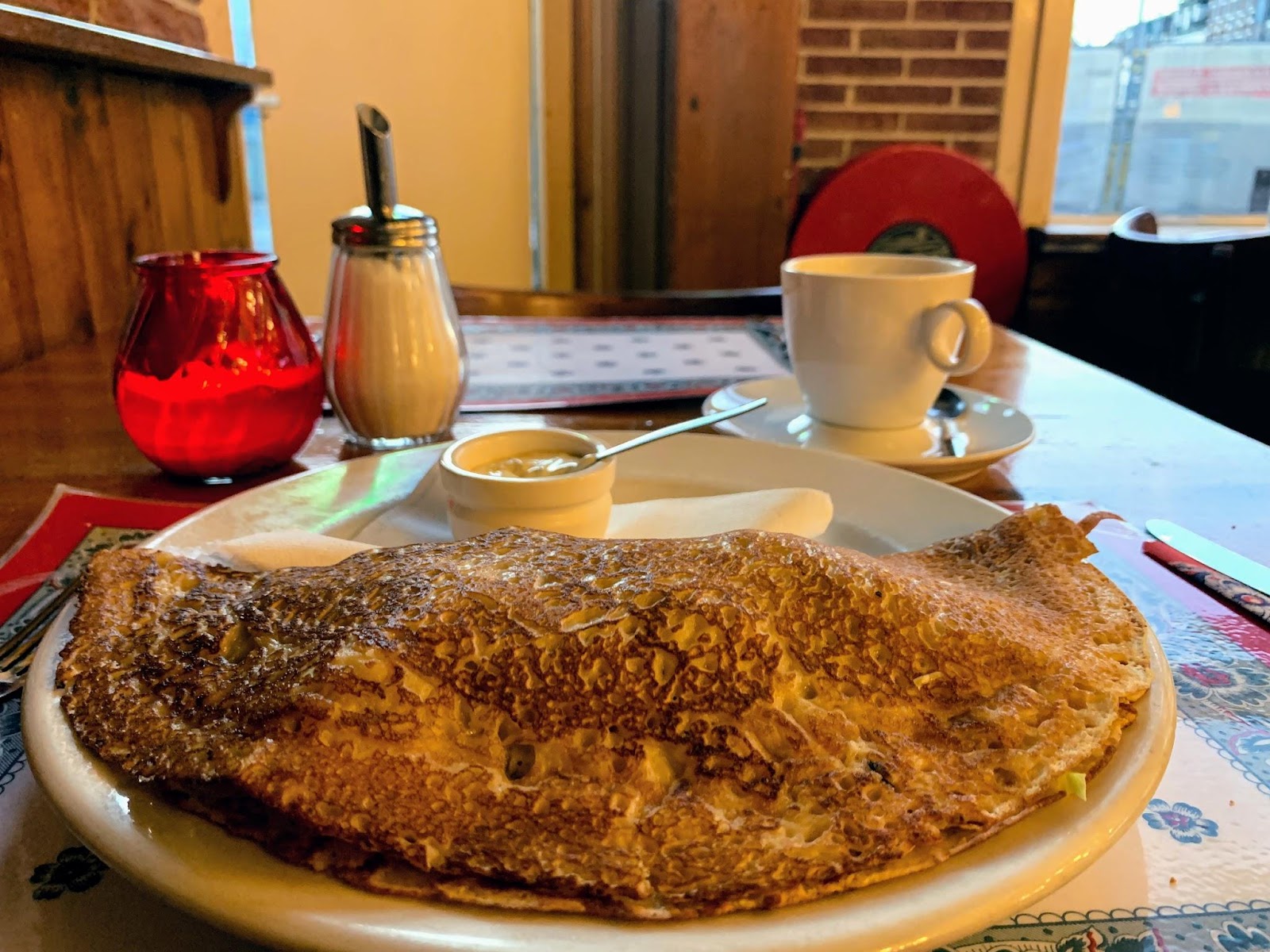 If you see a FEBO sign, do not pass it, I beg you! FEBOs are vending machines in Amsterdam where you can buy food. My first go at a FEBO, I was with my hostel roommate and we wanted a quick bite. I bought croquettes and he purchased a burger. That coquette was really delicious, I could not stop thinking about it. After we had dinner and paid probably over €20 for a burger at a restaurant it would have been better to stay at the machine and buy another burger for about €2,60 and grab a beer after, rather than pay €20.
Overall, DAM was one of my most memorable trips as there is a lot to see and a lot to do. It’s an enjoyable city! Make sure to book your tickets to museums ahead of time, especially if you want to see the Ann Frank house!

PODCAST ALERT!!
Check out our most recent episode.