Posted on October 1, 2016June 25, 2020
Every time I travel, each trip surprises me so much more than the last. By now I understand that the world is a big and beautiful place, but I am never prepared for the beauty that I see every time I visit a new country. And every time I go to these destinations, I am simply amazed of the majesty of God’s creation, and Machu Picchu definitely showed that fully.
A look at the journey
Before I flew to Peru, I reached out to one of my friend, Kevin, who had visited Peru, and he recommended that I use Loki Hostel to book my trip to Cusco and Machu Picchu. I was grateful for his recommendation because when I searched on my own, the packages were so much more expensive than what Loki offered. I originally booked their 4-day package, however, I changed it to the 2-day package because I was only going to be in Peru for 8 days, and I wanted to spend some time in Lima.

My trip to Machu Picchu began in the city of Cusco. Cusco has the charm of an old European City. The streets are small, with cobblestones and the houses are quaint and have an old Spanish flair. It is to Cusco that you will fly if you are going to Machu Picchu. There is a lot to see and do there, so plan time to explore. Truthfully, I wished I had spent a little more time in Cusco because 3 days was not good enough.

After my tour to Ollantaytambo—look out for the next post on the Sacred Valley—I waited at the Peru Rail Station in Ollantaytambo and boarded the train to Aguas Calientes, the town where Machu Picchu is located. The seats on the train were extremely comfy, and I felt like I was traveling in an airplane. The train attendants served us beverages and a cookie. The train rolled into the Aguas Calientes station at about 11 PM, and there one of the Loki guides met me and escorted me to the hostel. At this time, the town was still buzzing with life and I wanted to explore, but I couldn’t, I was too tired.
When I got to the hostel, I was briefed about my trek to Machu Picchu, not Machu Pichu Mountain, and was informed that I had to leave out at 4 AM. I was upset by this since that meant that I would only get 4 hours of sleep. The guide also informed me that I had to meet him at the top of the mountain, at the entrance to the ruins, which meant that I had to make the trek from the bottom to the top on my own. That made me nervous, but they assured me that it is hard to get lost because many people leave for Machu Picchu at that time, and there was only one road to follow. He was not wrong at all, of course, the road was buzzing with adventure seekers, ready to climb up the mountain by foot. Using a ticketed bus was an option, but I felt that took a lot away from the experience. But I did use it at the end of the day, and took it from the top of the mountain to the bottom. Also, I did not have to make the trek up the mountain on my own because I made friends with a Brazilian named Leo who was sitting in the lobby while I was being briefed on the tour of Macchu Picchu. So we decided to coordinate so we could leave out together.
Though walking up was challenging, I think it was well worth it. Once we began our ascent, Leo and I quickly realized that the altitude made climbing even harder. Every few minutes we had to stop and rest because we were out of breath. Everyone started out with a lot of momentum, but half way up the mountain it seemed like everyone was breathing thunderously, in synced and out of breath. Additionally, we would have never witnessed the view of the sunrise over the mountain while walking up if we had taken the bus. This view was spectacular and it took most of the climbers by surprise, and they could not help but stop and capture the moment with a photo. But as we realized that we were approaching the top it was a sigh of relief, because the walk up was painful.
It was hard to understand our tour guide but he left some important facts that stuck with me. One of the interesting facts that the guide mentioned for example, was that Machu Picchu was made famous or rediscovered in 1910 by Hiram Bingham III. None the less, the view at the top of Machu Picchu was simply majestic. Pictures do not do this majestic city justice. The fact that Machu Picchu was built on top of a mountain way before me was impressive. Artifacts like the stone compass to their method for farming impressed me. The view of Machu Picchu Mountain and Huayna Picchu added to the magnificence of this situate. 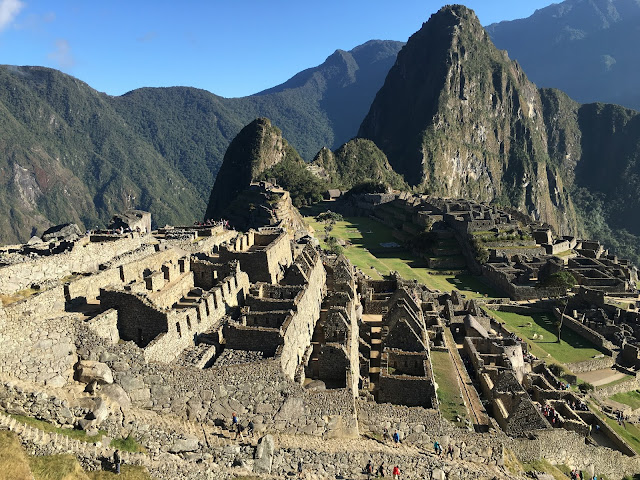 As the tour wrapped up and the tour guide hinted that some people had purchased tickets for either Huayna Picchu or Machu Picchu Mountain. I realized that I had purchased an extra ticket to climb Machu Picchu Mountain. So, I decided to take the opportunity and trek up Machu Picchu Mountain. I thought that it would be a 30 minutes climb at most, however, this climb lasted for over 3 hours, this is in addition to the 1 1/2-hour climb from the bottom.
The climb up Machu Picchu mountain tested me because I was scared most of the way up. However, with support from my climbing buddy, Shelby, I made it to the top. But seeing those steep cliffs almost made me take my mind off the prize, of getting to the top. Climbing up was a team effort since along the way everyone encouraged each other. They also laughed at me because it was no secret that I was a nervous wreck going up, especially when I got on my knees and started to crawl up, ha-ha. Despite my fears, getting to the top was rewarding and going back down turned out to be much easier than I expected.
If Machu Picchu is not on your list, I suggest that you add it. It will change your life and change your perspective in many ways. It will challenge you but at the end, you will realize that you are stronger than you think. I say, visit Peru.
Check out Shelby’s Page and Video of our Climb

0 Replies to “Journey to Machu Picchu”